Below are the fixtures and results for season 2014-15 for Old Owens Vets in the MID HERTS  VETS LEAGUE.

All parents friends and family of pupils playing in School football teams are invited to join us at Old Owen’s Sports Ground, Coopers Lane on Saturday 4th October from 9am onwards.

Not only will parents be able to watch the School games vs Parmiter’s School, they will also be eligible to become Social members of the Old Owen’s Association.

Membership benefits include Club priced drinks (10% discount on drinks if a member) in beautiful rural surroundings, priority social bookings for family events and the opportunity to become active members of football and cricket teams based at The Coopers Lane Ground.

There is a full programme of competitive football events on 4th October. The year 8,9 and 10 school games v Parmiter’s start at 9.30am and then the school Under 18 A and B Elevens play Old Owen’s sides at Midday, with three other Old Owen’s FC Southern Amateur League games kicking off at 3pm.

Entry is FREE with an ‘All Day’ barbecue and of course refreshments from the Clubhouse.

I look forward to meeting many of you on the day as this is an ideal opportunity to further strengthen the links between our School and ‘past pupils’ association.

(Past & Present players in action)

(The Occasion could be ‘Very Messy’ so even more reason to come along!) 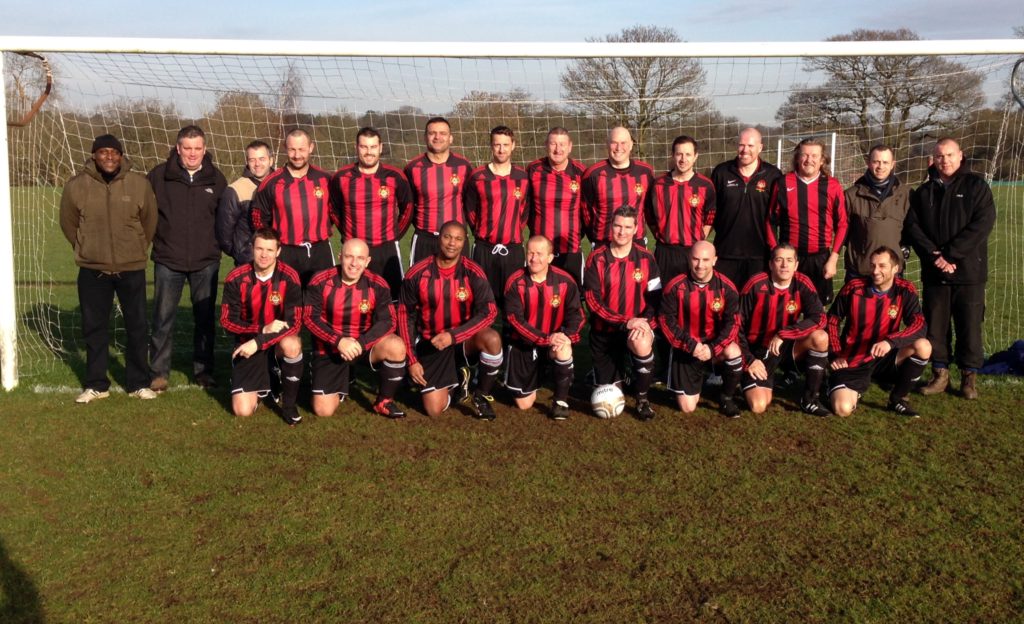 OLD OWEN’S VETS matches for the season 2015-16 commenced on the 6th September 2015.
The Vets having been crowned Champions in the Mid Herts Vets League last year have joined the BARNET Sunday Veterans League this Season.

The Vets started with a resounding 6-0 win away to the London Turkish Masters Legends at Wadham Lodge with goals from Steve Thorwell 3, Anthony Mann 2 & Paul Saroya (Chief), even though some of the players looked very rusty,.

Also see below picture of Derek (Don’t mess with my shirt) Henry. It has been rumoured that when Derek stops playing for Old Owen’s Vets that his shirt will be retired as a mark of respect.

(Thanks to Steve Anstey for providing the new Kit and Photos)

OLD OWEN’S VETS matches for the season 2013-14 commenced on the 8th September. The Vets will again be playing in Division 1 of the Mid Herts Vets League which comprises of 10 teams.

The Vets completed their League season last Sunday (13/04/2014) with a 3-0 win away to Sandridge Vets with goal by S.Rothberg 2 & P.Saroya with a penalty.

The Vets won the Mid-Herts League with a playing record of 17 wins and a draw in their 18 games.

WELL DONE TO THE CHAMPIONS and to all the PLAYERS and SUPPORTERS involved during the season.

OLD OWEN’s VETS matches for the season 2012-13 commenced on the 9th September.

OLD OWEN’S FOOTBALL VETS fixtures in 2010 -11 consisted of games in Division 1 of the Mid Herts Vets Leagueand Friendlies. There are 10 teams in the League and the Vets were due to play a total of 18 games in the League and 12 Friendlies but some fixtures were cancelled due to the weather and sides being unable to field teams.

Below are the fixtures and results for season 2013-14 for Old Owens Vets in the MID HERTS  VETS LEAGUE.

Below are the fixtures and results for season 2012-13 for Old Owens Vets in the MID HERTS  VETS LEAGUE.